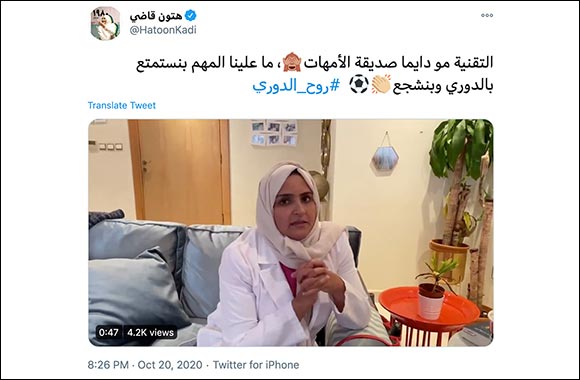 ÑæÍ_ÇáÏæÑí# (The League's spirit): Combining the love of football with humor on Twitter

United Arab Emirates,  October 21, 2020:  According to recent research by Twitter, football is the most popular sport on the platform in Saudi Arabia, with fans taking to the platform to celebrate heart-pounding victories, watch live tournament analysis, or cheer for their teams. In fact, there were 91 million Tweets around the 2019-20 Saudi Professional League (SPL) season. .

As the much anticipated 2020-21 season of SPL kicked off, a campaign took place on Twitter to celebrate the return of football in a light-hearted way. Rolled out across three days, a group of Saudi comedians showcased the humorous side of football; Hatoon Al Kadi (@HatoonKadi), Ibrahim Alhajjaj (@Barmz_alHajjaj), Mohammed Alqahtani (@MohmdQhtani), and Nawaf Shobaili (@nshobaili).

Launched on Monday 19th October under the hashtag ÑæÍ_ÇáÏæÑí# (The League’s Spirit), the first day of the campaign saw Twitter’s account in the Middle East (@TwitterMENA) invite the comedians to share their takes on their best SPL commentary moments. These were shared through voice Tweets, which add a more human experience to conversations and allowed the comedians to add their own personal style to the commentary. Currently being tested with people on iOS, everyone on Twitter is able to hear voice Tweets and reply to them, regardless if the feature is available to them or not.

“Fans have always turned to Twitter to be part of the action in real time. We’re seeing the passion and energy of the football stadium now surging online. Twitter is where fans, players, experts and leagues weigh in with a range of viewpoints. With humor being a key element of Twitter conversation in Saudi, the ÑæÍ_ÇáÏæÑí# campaign brought levity to a much anticipated event in the Kingdom.” said Kinda Ibrahim, Director of Media Partnerships, Middle East and North Africa, Twitter.

The focus of the second day of the campaign was around the much talked about Video Assistant Referee (VAR) technology. Throughout the last SPL season alone, there were more than 160,000 Tweets around VAR. The comedians created their own VAR moments through humorous video content shared on the platform. These illustrated real life scenarios of where VAR could come in handy, like to settle a challenge between friends, or to find out who really spilled the popcorn.

Sheikh Zayed Book Award Announces Longlist for the ‘Literature' Category in its ...

MAKTABA at the Department of Culture and Tourism – Abu Dhabi Celebrates Winners ...

Oman Insurance Reports a Net Profit of AED 160.2 Million in the Third Quarter of ...

Region to Inspire 50 Percent of Our Collection by 2023, Says Titan Watches

UAE- On the Path to Healthier ‘Next 50 Years”