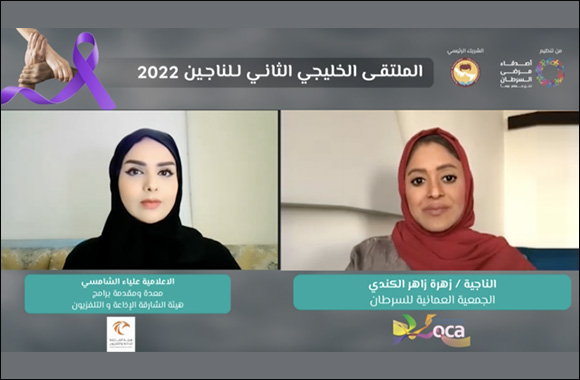 Empowerment and Moral Support are Crucial in the Battle Against Cancer, say Survivors at FOCP Forum

Sharjah, June 30, 2022:  Participants at the second edition of the Gulf Survivors Forum, organized virtually by UAE-based Friends Of Cancer Patients (FOCP) under the theme 'Together to Empower', have emphasized the importance of developing the potential and capacities of cancer survivors to empower and support them in leading healthy lives.

In collaboration with the Gulf Federation for Cancer Control (GFCC), the forum brought together entities from around the GCC and Yemen that are engaged in cancer prevention and control. The forum also shed light on the critical role played by organizations engaged in the rehabilitation of cancer survivors.
In her keynote speech, Sheikha Lubna bint Khalid Al Qasimi, vice-chairperson of FOCP's Board of Directors, stressed that since the establishment of FOCP under the directives of Her Highness Sheikha Jawaher, the non-profit has made massive strides in providing comprehensive support to cancer patients and their families, and raising awareness amongst communities in partnership with the public and private sectors.

Al Qasimi noted that the forum's inaugural edition had successfully spotlighted inspiring stories of cancer patients and survivors and underlined the key role of moral and psychological support in treatment plans.

In his keynote address, Dr. Khaled Al Saleh, General Secretary and Chief Editor of GFCC, said the immense benefits of moral and psychological support had prompted many hospitals to provide psychological consultation to boost the recovery of cancer patients.
He explained that community empowerment of survivors should be prioritized by cancer prevention and control institutions in the GCC and pointed out the region’s many successful experiences in empowering survivors and rehabilitating them. He added that these survivors are a beacon of hope and support to other survivors and patients under treatment.

The Secretary-General concluded that the World Health Organization considers cancer a treatable chronic disease, which sends out a positive message to patients. He added that efforts must continue to support survivors and encourage patients to complete their treatment.

Federal and local efforts
Addressing the online audience, Abdulla Ali Al Mahyan, Chairman, Sharjah Health Authority (SHA), lauded FOCP's efforts in organizing the forum, supporting patients, and raising community awareness of the importance of prevention, early detection, and timely treatment.
He noted that the authority had worked hard since its establishment in 2010 to raise awareness of cancer through campaigns, workshops, and comprehensive treatment programmes. He noted that cancer can be arrested by rallying institutional and societal efforts to promote healthy lifestyles, support scientific research, and increase the number of cancer centres to ensure the wellbeing of survivors.

Community empowerment
The second Gulf Survivors Forum included two sessions moderated by journalists Alia Al Shamsi and Saeed Al Amoudi. In the first session titled 'Community empowerment of survivors', Ayesha Al Tamimi from Qatar Cancer Society, described her journey of overcoming cancer through positive energy, high spirits, and the moral support she received, in addition to continuing to work and keep up with her hobbies.

Saudi Arabia: Hope rekindled
Survivor Latifa Mohamed, representing Zahra Association from Saudi Arabia, said: 'I was weak; however, kind words rekindled hope and helped me come to terms with the disease until I became a survivor. Through volunteering, I have now found a new purpose in my life – to support patients and instil hope in them.”
Kuwait: Early detection
For Nadia Yousef, it was an early diagnosis that helped her go through the treatment plan with hope and faith. She joined the Kuwait Society for Smoking & Cancer Prevention in 2017 to help raise awareness of cancer and empower survivors to become active in their communities.

UAE: Survivors' duty towards cancer patients
Cancer survivor Dr. Salah Eldin Ali from FOCP pointed out that survivors have a responsibility towards other cancer patients by raising greater awareness of the disease and instilling hope in them. He was diagnosed and treated twice before he decided to support patients during their treatment.

Yemen: Awareness and empowerment
Yemeni survivor Mohammed Saleh, representing Hadhramaut Cancer Control Foundation, authored a book titled Perseverance until Healing that documents his journey with cancer. He said that empowering cancer survivors infuses them with a new spirit to continue their treatment and unleash their creativity which can be channeled to help others experiencing the same journey.

Bahrain: Pushing capabilities
Survivor Nouf Abdul Aziz from the Bahrain Cancer Society, who works as a nurse, looked upon her diagnosis and treatment as a challenge and said she decided to beat cancer and start raising awareness amongst her family before expanding the circle to include cancer patients at the hospital where she works.

Oman: Inspiring journeys
The second panel discussed the role and impact of emotional and psychological support in enabling a positive response to treatment. Zahra Al Kindi, a cancer survivor representing Oman Cancer Association, described how psychological support was crucial to her recovery. From the initial shock of hearing the diagnosis of breast cancer, hope rekindled in her following the completion of the first round of treatments and the enduring support of her family and doctors, who also encouraged her to help other patients and survivors through their treatment journeys.

Psychological support for empowering survivors
Dr. Naema Al Ali, a consultant and medical psychologist from the UAE, shared her expert insights on ‘Community Role in Cancer Survivors' Empowerment’. She said: 'Supporting patients is key because cancer has a physical and psychological impact, some of them long-term, especially as it instils the fear of a relapse.'
She stressed that psychological and moral support helps alleviate the feelings of fear, anxiety, and sadness which may be experienced by patients and their family and friends, which can hinder treatment.

The second edition of the Gulf Survivors Forum concluded with a film highlighting the efforts of GCC entities engaged in cancer prevention and control and featured inspiring stories of survivors from the GCC region.