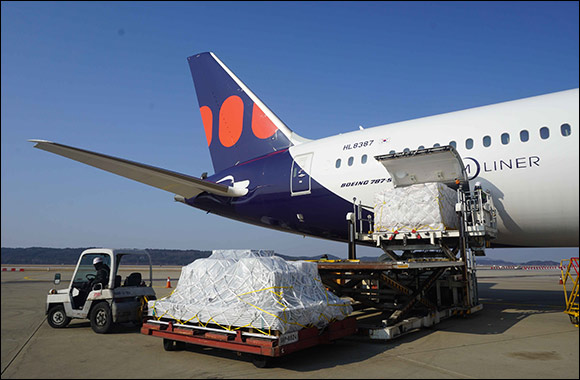 Globe Air Cargo (GAC) Korea, a subsidiary of ECS Group, is proud to serve as GSA to Korea’s young and ambitious hybrid service carrier, Air Premia, in its home market.

There is a Korean proverb: “bogi joeun tteogi meokgido jota” which translates literally into “good-looking tteok [rice cake] tastes good”, and means “if it looks good, it’ll likely taste good.” Take ECS Group’s newest subsidiary, Seoul-based GAC Korea, and match it with Air Premia, the first Korean hybrid service carrier (HSC) with a serious interest in air cargo, and the result is a very promising tteok. Both companies share the same drive and corporate values that point to a long and successful business partnership, and both operate out of Incheon International Airport (ICN), Seoul, Korea. In accordance with the signed Cargo General Sales Agency Agreement (GSA), GAC Korea fulfils daily operational duties for Air Premia, which include cargo sales, reservations, and ensuring the handling of regular and full charter flights. In addition to this bespoke home market GSA service, ECS Group also represents Air Premia all of the world.

H.E. Shin, CEO of Globe Air Cargo Korea, details “GAC Korea and Air Premia truly act as one team, since we have been there from the start of its inaugural passenger to cargo (P2C) flight out of Seoul to Singapore on 24 December 2021. We are proud to have the opportunity to support Air Premia at its homebase, as its very first GSA since the airline was established in 2017. As part of the world’s largest integrated GSSA, we look forward to driving Air Premia’s success as it expands its network. We particularly welcome the launch of Air Premia’s Los Angeles route in August 2022, not only because it will be the first HSC in Korea to incorporate a U.S. destination, but also because ECS Group will be opening an office in Los Angeles (LAX), too, to manage sales out of the North and South America. In that respect, thanks to Air Premia’s network, ICN is an important hub for ECS Group”

In addition to its upcoming LAX launch, Air Premia will be connecting to Narita (NRT), Japan, in August 2022. To date, GAC Korea has assisted with Mango B787-9 charters between ICN and Bangkok (BKK) since 06 March 2022, with a total of 22 operations planned every Tuesday and Sunday until 22 May 2022. Air Premia serves Singapore (SIN) twice a week with P2C flights, and recently began twice-weekly Ho Chi Minh (SGN), Vietnam, P2C operations. The airline has ambitious fleet growth plans, adding two B787-9 aircrafts every year until 2025 and growing to ten at 2026, by which time it also plans to operate wide-body freighters.

Sharjah Summer Promotions 2022 launches across the Emirate of Sharjah

Bringing Women from all across the Emirate Together!

Get Ready to Swoon! As Most Awaited Party Anthem ‘CASANOVA' by Global Music Sens ...

‘Masala King — a Journey of Memoirs' the Autobiography of Dr. Dhananjay Datar La ...

Expo Center Sharjah Inaugurates the 3rd edition of the Jewels of Emirates Show 2 ...

Empowerment and Moral Support are Crucial in the Battle Against Cancer, say Surv ...