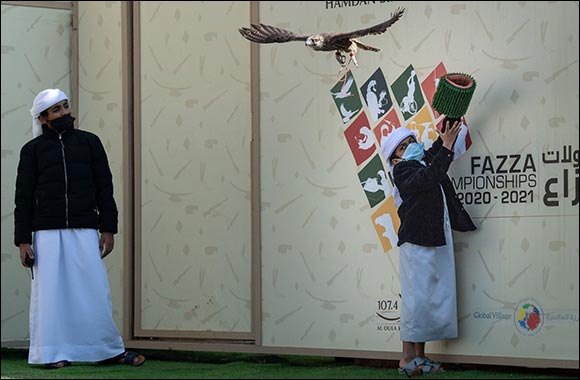 Share Home >> Entertainment
229 falcons compete in the Juniors Category of Fazza Championship for Falconry-Telwah over the weekend
Dubai, 17 January 2021:  Young Emiratis have taken the tradition of falconry to a higher level. A total of 229 falcons competed in the Juniors Category of Fazza Championship for Falconry-Telwah, organised by the Hamdan Bin Mohammed Heritage Center (HHC), over the weekend at Al Ruwayyah desert area.
“These young falconers – some as young as five years old and accompanied by their fathers – are a testament that the 2,000-year old sport of falconry continues to flourish even in the times of computer games and gadgets.  Their keen interest and strong participation will keep the traditional sport alive and growing in the years to come,” noted Suad Ibrahim Darwish, HHC Director of Championships.
Organised by the Hamdan Bin Mohammed Heritage Center, falconry defines the UAE’s rich cultural heritage and is a showcase of the intangible Emirati culture. Over the years, with strong support from His Highness Sheikh Hamdan bin Mohammed bin Rashid Al Maktoum, Crown Prince of Dubai.
Darwish shared: “We started with a small number of falconers and now Fazza Championship for Falconry has grown in size, popularity and prestige and is now recognised as a highly-anticipated annual gathering of the best falconers from across the region and beyond.”
“We have falconers of all ages and birds of various breeds and abilities. We have seen the progress in all categories, especially in the Junior Category. The young Emirati falconers are showing more interest and they also come prepared in every competition,” she added.
Flourishing Emirati culture
Dawish underlined: “The youth today are showing not only a growing interest in falconry but also how proud they are of their national identity. Whenever they come to the event, they wear their national attire and this is how they strongly promote our culture to the present and future generations,” she explained.
Winners
Eight races were held on Friday. The first place winners are: Rashid Hamdan bin Mejren won two first places with his bird “2” that finished the 400-metre race with a time of 19.281 seconds and another falcon named 'Magnum100' with a time of 18.428 seconds.
Khalifa Al-Huraiz and his bird won a race for Jirnas falcons with a 18.659 seconds; Khaled Marawan Bin Mejren won in the Jeer category at 17.945 seconds.
Saqr Khaled Al-Shamsi won in a race with his falcon that clocked 19.970 while Muhammad Ahmad Al-Ketbi won in another race with ‘Mafnoud’ with a time of 18.514 seconds.  Eissa Saeed Al-Mansoori and Sultan Hamad bin Mejren also first places.
Public health and safety
Darwish praised the strong participation and cooperation of the falconers. “In terms of health and safety, the falconers have been carefully following all precautionary measures to ensure everyone’s health and safety as they follow preventive measures from the Covid-19 pandemic,” she added.


COVID-19 Has Changed the It Spending Priorities for Airports and Airlines in 202 ...

Shaping New Governance to Lead Federal Ministries and Departments Is a National ...