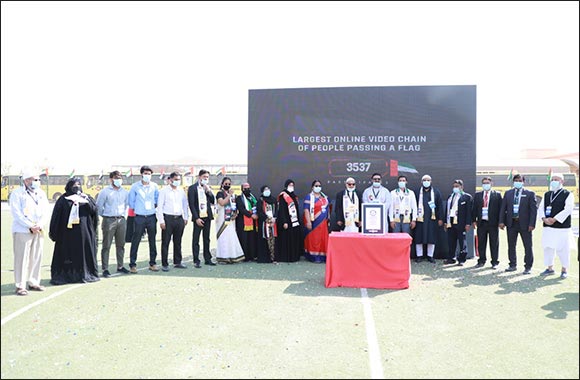 United Arab Emirates -  November 30, 2020:  PACE Education Group once again bolstered their social commitment and determination through the achievement of it’s consecutive 5th Guinness World Record on 29th November with the largest online video chain of people passing a flag to commemorate the 49th UAE National Day.  The attempt organized by the India International School, Sharjah under the theme – “Together with UAE” was initiated as an expression of respect, love, solidarity and standing together as a community with the nation of UAE during these trying times.

As many as 3537 students belonging to 15 nationalities, parents and employees of IIS Sharjah together with PACE Group, accomplished this remarkable attempt of an online video of waving the UAE national flag as a tribute to the country and to the unwavering spirit of its visionary leaders, frontline heroes and the residents who have been tireless in their efforts to revive the nation to its glory after the devastating grapple of the COVID pandemic.

On its educational expedition towards success, IIS, Sharjah set its first Guinness Record in the year 2017 creating the largest human image of a boat with 4882 participants, followed by a double record in 2018 for the largest human image of a ‘Dallah’ (coffee pot) by 5403 and the largest transforming human image by 5445 participants respectively. In 2019, the attempt titled ‘PACE to SPACE’ was designed to form the largest human image of the Russian Soyuz MS-15 spacecraft as a tribute to Hazzaa Al Mansoori’s mission to space. The world record projects were the brainchild of Vice-Principal Ms Shifana Muiz and Sr. Administration Manager Safa Azad. These achievements are the outcome of the enormous support extended by the Chairman of PACE Education Group, Dr P.A. Ibrahim, along with Directors - Aseef Mohammed, Salman Ibrahim, Zubair Ibrahim, Bilal Ibrahim, Adil Ibrahim, Asst. Director Abdul Kareem, Principal Manju Reji and Vice-Principal Syed Tahir Ali

The latest record was conceptualized and executed again under the leadership of Ms Shifana Muiz and Ms Safa Azad with a team of IT professionals  – Mushthaq, Rishal and Sharukh headed by PACE Group IT Head Refeeq Rehuman. A special note of thanks to PreparEd Academy, an EdTech subsidiary of PACE Group for their technical support to complete the video

Dubai Shopping Festival's Highest Value Raffle Ever In Partnership With Idealz a ...

'T10 is a perfect advert to bring new audiences to cricket,' says Shoaib Malik a ...

The Icons, The Leather

Experience a weirdly wonderful world: Visiting Ripley's Believe It or Not!® muse ...

The Most Inclusive Range of Primers to Offer 24hr Correction for Any Skin Type, ...

Cebu Pacific releases travel advisory on extension of entry restrictions for for ...

A 97-year-old citizen receives the first dose of the Covid 19 vaccine at a “SEHA ...