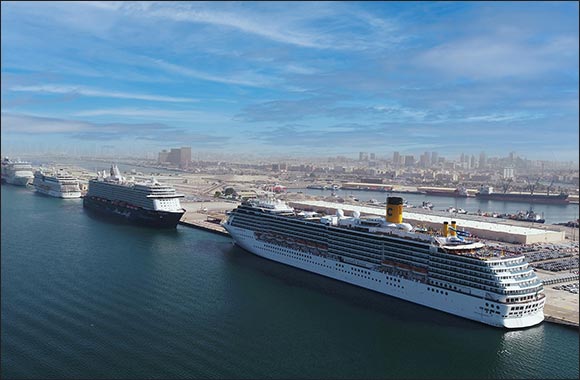 Dubai, United Arab Emirates, November 28, 2020:  DP World, UAE Region’s Mina Rashid bagged the award for the World’s Leading Cruise Port once again at the World Travel Awards (WTA) 2020. The award that is considered as a noteworthy accolade in the travel industry, included nominations of cruise ports from around the world.

Mina Rashid has retained this coveted title for 13 successive years, since 2008. Over the years, owing to extensive development and significant upgrades, the port has become a preferred destination for cruise lines around the world. The port, that has transformed the status of Dubai from a facilitator of dhow-enabled trade to a global community hub for the maritime sector, has gained recognition from travellers around the world yet again.

Mina Rashid’s proximity to Dubai International Airport and the heart of the city make it an ideal choice as passengers can get easy access to key locales in the city. The port boasts a quay wall of 2.3km and can simultaneously handle seven mega-cruise vessels or 25,000 passengers in a single day.

Central to Mina Rashid’s stellar performance is their flagship Hamdan bin Mohammed Cruise Terminal, which is the world’s biggest single, covered cruise terminal facility. The state-of-the-art terminal has the capacity to receive 14,000 passengers per day. Since its inauguration in 2014 until 2020, the terminal witnessed a growth of 55 per cent, receiving a high volume of cruise ships. In 2015, the terminal received four cruise ships carrying approximately 20,000 passengers and crew in a single day. Five cruise ships with around 24,000 travellers and crew visited on every weekend in 2017, during the peak season. The terminal achieved the feat of receiving six ships with around 35,000 passengers and crew in a single day in the 2019/20 season.

Mohammed Al Mannaei, CEO, P&O Marinas and Executive Director, Mina Rashid said, “It is an honour to receive this award, year after year. 2020 was a challenging year, despite this it is heart-warming to see that Mina Rashid is still the top choice. This proves that we are moving in the right direction in terms of promoting Dubai as a popular destination for international cruise tourists. As the Middle East’s premier destination for cruise operators, Mina Rashid offers a value proposition to global luxury cruise liners. Each year, we have seen a steady increase in tourist traffic.”

Al Mannaei added, “It goes without saying that the cruise tourism industry has been impacted by the global pandemic, but we are confident that growth can be expected in the near future. However, with that said, we are certain that Dubai will continue to remain popular as a homeporting choice among international cruise liners. We will carry on our efforts and work closely with our valued partners to boost luxury cruise tourism and further strengthen Dubai’s leading position.”
Expansion projects are ongoing at the port to enhance its capabilities and solder the city’s preeminent position in the global tourism industry. The expert team overseeing the port is tirelessly working with dedication and passion to reinvent and explore new collaborations to enhance the regional and global cruise industry.

Tonin Casa: A Complete Look for Your Home

'The Entertainment in T10 is Even Higher than T20,' says Johnson Charles ahead o ...