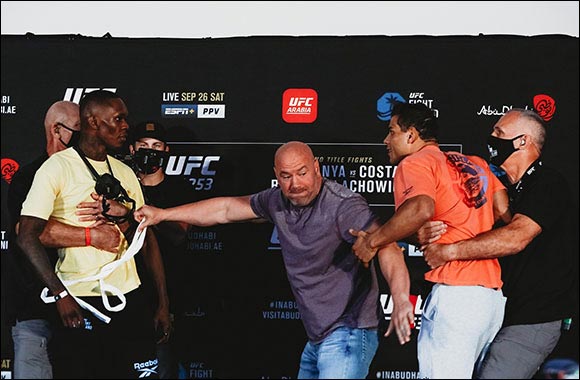 Share Home >> Entertainment
UFC® 253 pre-fight showdown at Flash Forum became the most viewed face-off of all time on Instagram with 7.6 million views
Abu Dhabi, UAE - September 27, 2020: Return to Fight Island, the mega, five-event UFC series taking place on Yas Island in Abu Dhabi continues to make history, with the pre-fight UFC® 253 ADESANYA vs COSTA face-off setting new records.
Following a hugely successful debut in July, the second instalment of UFC Fight Island™ has  already made its mark as it is set to see the first time that two consecutive UFC numbered events (UFC® 253 and UFC® 254) will be held in the same city outside of Las Vegas. In addition, the face-off between headline fighters Israel Adesanya and Paulo Costa at Flash Forum before Sunday morning’s clash further made history by breaking UFC viewership records online.
• The video of Adesanya and Costa facing off is now the most shared video of all time on UFC’s Instagram account.
• It became the most viewed face-off in UFC’s Instagram history, recording more than 7.6 million views, 1.5 million more than the legendary face-off between
Khabib Nurmagomedov and Connor McGregor in 2018.
• Footage of the face-off has become the most viewed post on UFC Asia’s Facebook page with more than 8 million views.
• It has attracted more than 26 million views across all UFC social media accounts
• The face-off video is the fifth most liked post of all time on UFC’s Instagram account

Tonin Casa: A Complete Look for Your Home

'The Entertainment in T10 is Even Higher than T20,' says Johnson Charles ahead o ...