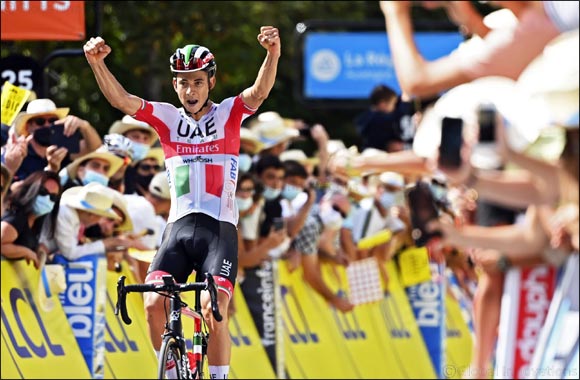 Share Home >> Entertainment
United Arab Emirates, August 15, 2020:   After narrowly missing out on a victory at Strade Bianche, UAE Team Emirates’ Davide Formolo took his first win of the season with a 60km solo attack in stage 3 of the Criterium du Dauphine.
The Italian national champion was able to make the early breakaway with a small but strong contingent of riders who worked together to keep the peloton at bay over a series of challenging climbs. As the group of nine worked their way up the penultimate ascent on the Col du Madeleine, Formolo made his move – exploding into action with powerful attack that his rivals couldn’t match. He started the final climb to Saint-Martin-de-Belleville with a five minute lead but with GC leaders Jumbo-Visma keen to put their rivals under pressure, Formolo had to fight for every second as he battled up the last 14.6km climb.
Inside the final few kilometres Formolo looked visibly exhausted as the chasing pack began to close the gap, however his determination, guile and experience took him to the line 33 seconds ahead of Primoz Roglic (Jumbo Visma) and Thibaut Pinot (Groupama FDJ) who claimed second and third place respectively.
David Formolo said: “I was in the break from the start with eight guys, and already before the Col de la Madeleine I thought we only have three minutes – there’s no way I can wait until the finish. So I decided to ride my own rhythm on the Madeleine and try and get some space between the bunch. I actually thought the last climb started straight after the descent, but it was 10km up and down in the valley, which was really hard and I lost a lot of energy.
'On the last climb I didn’t know if I could make it. I was looking at the profile and saw the Madeleine was really hard then I saw this last climb was slightly up and down the whole time. I thought it would be impossible to make a big difference in the break so I’d better attack on the Madeleine, and then pray I came to the finish line.”
Sports Director Allan Peiper added: “Today we had planned to get someone in the breakaway, and luckily we got our best man in it with Formolo. At the base of the climb he created enough of a gap and was able to leave the rest of the breakaway behind and hold off the bunch until the finish – it was a pretty amazing ride actually”.
The team now turns its attention to stage 4, a 153.5km mountain stage from Ugine to Megeve with 6 classified climbs ahead of another brutal summit finish.
Stage 3 Results
1. Davide Fomolo (UAE Team Emirates) 4:06:56
2. Primoz Roglic (Team Jumbo-Visma) +33”
3. Thibaut Pinot (Groupama-FDJ) “
General Classification
1. Primoz Roglic (Team Jumbo-Visma) 13:14:35”
2. Thibaut Pinot (Groupama-FDJ) +14”
3. Emanuel Buchmann (Bora Hansbrohe) +20”
11. Tadej Pogacar (UAE Team Emirates) +1:17”
The win built on the team’s performance at Gran Piemonte earlier in the week which saw Diego Ulissi stand on the second step of the podium after his uphill sprint was enough to distance the bunch but not close the gap on George Bennett (Jumbo Visma) who had attacked early on the last climb to claim the victory.
Race Results
1. George Bennett (Team Jumbo-Visma) 4:38:23”
2. Diego Ulissi (UAE Team Emirates) “
3. Mathieu Van De Poel (Alpecin Fenix) +4”

A Team of UAE Residents Found their Breakthrough Moment with An Innovation That ...

Jumbo Group Extends Support to People of Determination in the UAE Amidst COVID-1 ...

UAE Invention That Brings Colour Into the Lives of the Visually Impaired Wins J ...

How AI is Changing Banking