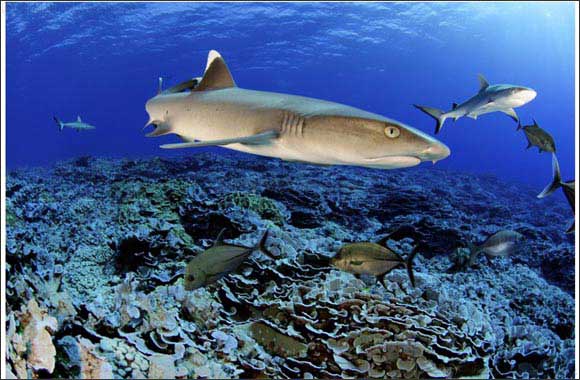 THE CHAMPS ARE BACK, AND THEY’RE READY TO CHOMP!

Over the course of 6 weeks, National Geographic Abu Dhabi will feature a variety of jaw-dropping SHARKFEST originals and specials to catch the viewer’s eye, including Sharks of the Bermuda Triangle, where a marine biologist tracks an elusive tiger shark to uncover Mother Nature’s most mysterious hotspot and also experience the intensity of a sea-life standoff in Whale vs. Shark.

The marathon of programming also underscores the best of the networks’ wide shark library content — which includes hundreds of hours of programming — with titles airing throughout the six weeks, beginning on the 5th August 2020, every Wednesday at 9 PM UAE Time/8 PM KSA Time.

SHARKFEST’S full summer season original programming line-up is below.
Sharks of the Bermuda Triangle
National Geographic Abu Dhabi - Wednesday, August 12, at 9 PM UAE Time/8 PM KSA Time
The Bermuda Triangle has more than 129,000 square kilometres of rumoured mysteries, including missing airplanes, sunken ships, malfunctioning compasses and even legends of Atlantis. In reality, its greatest wonder may be something far more incredible: sharks. For years, marine biologist Dr. Austin Gallagher has been investigating sharks in the area; he’s been on a mission to find the holy grail of shark research: the secret breeding grounds of tiger sharks. Tracking an elusive tiger shark named Mabel, he attempts to uncover Mother Nature’s most mysterious hotspot.

Whale vs. Shark
National Geographic Abu Dhabi — Wednesday, August 19, at 9 PM UAE Time/8 PM KSA Time
A routine drone survey turns deadly when Ryan Johnson, a marine biologist based in South Africa, films a humpback whale being attacked and strategically drowned by a great white shark. The never-before-seen behaviour causes a complete perspective shift on a creature Johnson has spent his life studying. To make sense of the event, he follows humpback whales on their migration, mapping places that may make them vulnerable, and takes a new look at great white sharks to discover how and why they become whale killers.

Previous in Home, Furniture and Interiors

Next in Home, Furniture and Interiors