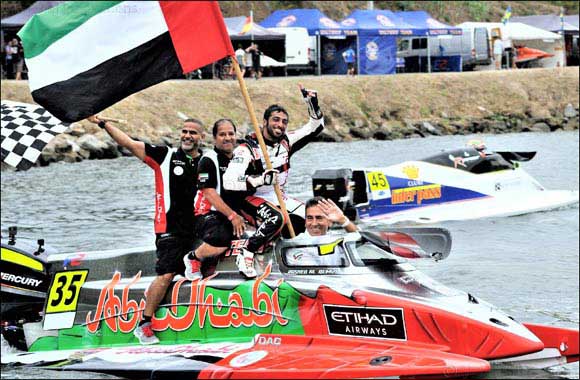 We have great drivers, but fantastic team spirit is key to success, says powerboat racing legend

It followed the team’s World Endurance Championships triumph earlier in the year, and Rashed Al Qemzi’s achievement in landing the UIM F2 world driver’s title with one round to spare.

“I’m very proud of what we have achieved together as a team, with the backing of Abu Dhabi International Marine Sports Club,” said Cappelini, the ten-times former UIM F1H2O champion.

“Of course we have great drivers, but we also have a fantastic team spirit, and over the last five years everyone in the team has worked very hard to bring so much success to Abu Dhabi.

“This was shown in Sharjah where we had technical problems with Shaun’s boat all week, but the team found a solution which allowed us to finish the season as champions again.

“I’m very excited about what lies ahead for Team Abu Dhabi, and everyone in the team can’t wait for next season.”

In June this year, Abu Dhabi International Marine Sports Club announced that, as a reward for outstanding results, the Italian powerboat racing legend had signed a new contract that would see him continue as team manager until 2025.

Prior to this season, the team had won two UIM F1H2O drivers titles (Torrente and Alex Carella) under Cappellini, three UIM F1H2O team championships, as well as UIM F2 and F4-S triumphs for Rashed Al Qemzi.