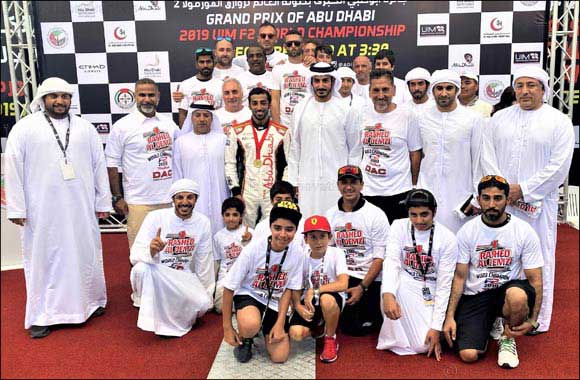 Share Home >> Entertainment
Abu Dhabi, UAE, 8 December, 2019:   Rashed Al Qemzi crowned his brilliant season in the 2019 UIM F2 World Championship today with an emphatic home victory in the Grand Prix of Abu Dhabi.
The Team Abu Dhabi driver, already installed as F2 world champion for the second time in three years, led from start to finish to record his fourth Grand Prix triumph of the year with 4.63 seconds  to spare from Portugal’s Duarte Benavente, with Lithuanian Edgaras Riabko third.
This success on home waters is the one that means most to Al Qemzi, particularly as he goes into the record books as the winner of the first ever UIM F2 race staged in the UAE capital.
The Emirati looked in complete control throughout, resisting Benavente’s challenge to pull away on the first lap, and refusing to be unsettled when the race was interrupted twice in quick succession following crashes by Sweden’s Johan Österberg and Dutchman Ferdinand Zandbergen.
It has been an outstanding season for Al Qemzi from his opening round victory in Lithuania in June. Other victories followed in Italy and Portugal to clinch the title with one round to spare, adding to the Nations Cup and F4-S world championships he secured before his first F2 triumph in 2017.
He has benefitted enormously from the vast experience and influence of ten-times former F1H2O champion Guido Cappellini, who has guided Team Abu Dhabi to nine world titles in five years.
To broaden Al Qemzi’s experience of different race conditions and pressure, the shrewd Cappellini included him in the team’s top four-man crew for this year’s World Endurance Championships, which they duly won in Poland in July.
The opening free practice session in Abu Dhabi on Thursday saw Al Qemzi start in a boat being tested for next year’s championship, meaning Cappellini and the Emirati driver were already thinking ahead to a third F2 world crown.
Grand Prix of Abu Dhabi, leading positions:
1. Rashed Al Qemzi UAE 44 laps
2. Duarte Benavente POR  +4.63
3. Edgaras Riabko LT +15.28
4. Stefan Hagin GER  +16.69
5. Nikita Lijcs LAT +47.03
6. Kalle Viippo FIN +19.56 (43)
7. Uvis Slakteris LAT +23.35 (43)
8. Ahmad Al Fahim UAE +29.60 (43)
9. Héctor Sanz SPA +33.60 (43)
10. Mette Bjerknæs NOR +31.75 (42)

Mandatory Hallmarking of Gold: It is a Win-Win Deal for Buyers, Sellers

Adidas Launches the Latest Adizero Footwear, Evolving Fast for the Road and the ...

Abu Dhabi Is the First Location Globally to Recieve the First Shipment of the Ne ...

Transform your Home into your Dream Office with Natuzzi's Exquisite Desk Selecti ...

The Very First Glimpse of the New GranTurismo Prototype