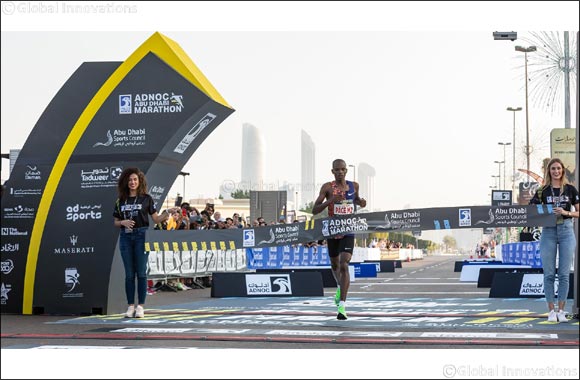 Share Home >> Entertainment
• Men’s first place awarded to Kenya’s Rueben Kiprop Kipyego with a personal best time of 2:04:40
• Kipyego marks his place in the history books achieving the rare feat of winning as the pacemaker
• Kenya’s Vivian Kiplagat crossed the finish line in 2:21:11 to take first place in the women’s elite race and set new PB
• Over 16,500 participants from across the world registered to take part in the second ADNOC Abu Dhabi Marathon
• Elite wheelchair category won by the UAE’s Ayed Al Ahbabi
Abu Dhabi, United Arab Emirates – December 7, 2019:   Kenya’s Rueben Kipyego and  Vivian Kiplagat secured emphatic victories in the second ADNOC Abu Dhabi Marathon this morning.
The event attracted over 16,500 professional and novice runners who took part in the second ADNOC Abu Dhabi Marathon across four race categories - 42k, 10k, 5k and 2.5k - and were able to take in the capital’s iconic landmarks including Emirates Heritage Village and Qasr Al Hosn. In a special awards ceremony held outside the headquarters of the marathon’s title sponsor, the Abu Dhabi National Oil Company (ADNOC), the event’s trophies were presented to first, second and third place male and female finishers in the 42k, 10k and wheelchair races. All participants who took part also received a congratulatory medal.
Kipyego, the 23-year-old Kenyan, made marathon history, starting as the pacemaker to take first place in a time of 2:04:40, smashing his personal best set earlier in the year at the Buenos Aires Marathon by 38 seconds. He was followed one minute and 41 seconds later by fellow Kenyan Joel Kimurer who also broke his personal best by well over a minute with a time of 2:06:21. The marathon’s third place award went to Ethiopia’s Fikadu Teferi Girma who secured a time of 2:09:16.
Vivaian Kiplagat stormed to victory in a time of 2:21:11, setting another new personal best, shaving over a minute off the time set in her victory at the Milano Marathon earlier this year. She was followed two minutes 52 seconds later by Ethiopia’s Wude Yimer Ayalew who crossed the line in 2:24:03. The marathon’s third place award went to Ethiopia’s Yeshi Chekole Kalaya who secured a time of 2:24:28.
Ethiopians, Teresa Nyakola Gela and Sintayehu Tilahun Getahun, were victorious in the male and female 10k race respectively with times of 28:05 and 32:47, followed by second place male and female finishers, Andrew Kwemoi and Joselyn Brea and third place finishers Noaman Elassaoui and Zenash Bekele Mamo.
The elite wheelchair category was won by Emirati Ayed Al Ahbabi in a time of 1:51:12 followed closely by fellow countrymen, Husain Al Mazam and Ali Al Saadi.
KEY QUOTES
Commenting after his historic win, Reuben Kipyego said: “I was setting the pace for the first 30km feeling very good and when I turned back to see that the pack was not close behind, I decided that I was going to push to the finish. For me, the conditions were ideal and the course was beautiful and I’m already looking forward to returning to Abu Dhabi to defend my title.”
Vivian Kiplagat expressed her delight in winning the ADNOC Abu Dhabi Marathon: “I’m very happy to set a new personal record and to win. I think that the race conditions and the course were good. I tried my best and this allowed me to run the first half in 69 minutes and continue with a fast pace for the second half.”
H.E. Dr. Sultan Ahmed Al Jaber, ADNOC Group CEO, said: “ADNOC continues to play its pivotal role as a key enabler of the economic and social development of the UAE. ADNOC Abu Dhabi Marathon is part of our social responsibility commitment to support sporting and community events.
'The huge number of participants from global and local community in this year's Marathon not only reflects the growing popularity of this event, but also reinforces the UAE’s growing reputation as a world-class sporting destination.  We are delighted with our successful partnership with Abu Dhabi Sports Council in organizing the Marathon and supporting the growth of the wider sports sector in the UAE,” he added.
H.E. congratulated the winners and all the participants across all categories.
H.E Aref Al Awani, General Secretary of Abu Dhabi Sports Council said: “Today, Abu Dhabi has further cemented its place at the top table of sporting cities with the second successful instalment of the ADNOC Abu Dhabi Marathon.  With over 16,500 registered participants from all walks of life and with all kinds of capabilities, it has been a true celebration of the city’s excellence and diversity.  A special mention and congratulations must go to the winners of today’s races and to all the international athletes who travelled from across the world to be with us here today.”
Andrea Trabuio, Race Director, said: “The results of ADNOC Abu Dhabi Marathon have once again exceeded expectations, both in terms of the number of runners and the amazing times achieved today. It was a very fast and beautiful route through Abu Dhabi’s streets and the elite runners have rewarded us with a terrific race. We are already looking forward to making the 2020 ADNOC Marathon the best yet.”

French Healthcare Expertise To Be Introduced At Arab Health 2020

Future of safety, security and fire protection on display at Intersec 2020

Nickelodeon Singalongs! is bringing the party to City Centre Deira

Eolisair, the Middle East leading company in Indoor Air Quality to participate a ...

Why this is the right time for TMCs to automate their processes?

Patients suffering from secondary infertility due to genetic problems give birth ...