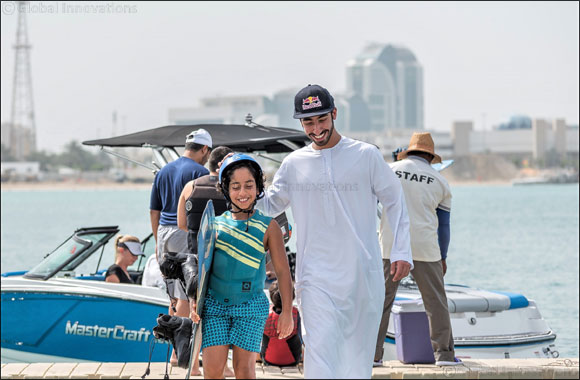 Share Home >> Entertainment
Subaa says host country’s first international team can upgrade as competitors and learn from the best in the sport
Abu Dhabi, UAE, 17th November, 2019:   Khaled Subaa, who leads the UAE into this week’s 2019 IWWF World Wakeboard Championships in Abu Dhabi, is relishing the chance to compete against the sport’s best talent.
The 23-year-old wakeboard and waterski athlete from Ras Al Khaimah is proud to have been named captain of the six-strong team representing the host nation, and is ready for his biggest challenge to date.
Massimiliano Piffaretti from Italy and Sanne Meijer from the Netherlands, who recently won gold medals at the ANOC Worlds Beach Games, head a line-up of more than 150 riders from 31 countries contesting the five-day event getting under way at the Eastern Mangroves Promenade on Tuesday.
“It’s a great opportunity to compete at the top level for the first time,” said Subaa, who has been wakeboarding competitively for less than three years but water skiing since the age of seven.
“I’m very excited for myself and the rest of the team. We have the chance to upgrade ourselves as competitors and learn from the best in the sport.
“The most important thing is the opportunity to talk to them and learn how to improve. Added to that, I love the fact that we’re going to be part of the wakeboarding community which brings people together.”
“From a competitive point of view, to be honest, it’s going to be difficult competing in the Open Men’s category because the standard is so high. But I’ll be aiming to advance past the first round, which will be tough, but not impossible.”
Joining him in the Open Men’s category is Omeir Saeed, whose younger brother, Ahmed Saeed, lines up in the 14 & Under Boys category with Hamed Al Belooshi and Mohamed Al Belooshi. Ahmed Al Remeithi completes the UAE team line-up in the Junior 18 & Under Men’s category.
Abu Dhabi International Marine Sports Club, which won the bid to stage the IWWF World Wakeboard Championships, has been working round the clock with the International Waterski & Wakeboard Federation, the sport’s governing body, to create an event which makes a lasting impact.
Based at the Anantara Eastern Mangroves Abu Dhabi Hotel, it offers a world-class venue both for competitors and spectators, and is designed to boost interest in wakeboarding and reinforce the UAE capital’s status as top international water sports destination.

Get School Ready With Super Back to School Offers and Exciting Activities, Broug ...