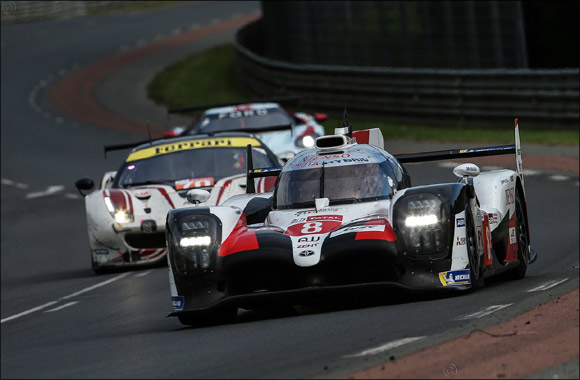 Share Home >> Automobile
Toyota Hybrid Electric Vehicle TS050 breaks Le Mans record with fastest-ever lap
Dubai, United Arab Emirates - 27 June 2019:  GAZOO Racing (GR) recently won the 87th 24 Hours of Le Mans with a one-two finish at the Circuit de la Sarthe in France following a dramatic final hour of the 2018-2019 FIA World Endurance Championship (WEC) season. The trio of Sébastien Buemi, Kazuki Nakajima, and Fernando Alonso successfully defended their Le Mans crown in the No. 8 TS050 Hybrid Electric Vehicle (HEV), securing the Drivers' World Championship in front of 252,500 spectators, and capping a highly successful season for the GR team.
The winners finished 16.9 seconds ahead of their GR team-mates Mike Conway, Kamui Kobayashi, and José María López when they slipped into second place in the No. 7 TS050 HEV after leading for most of the race. Kamui had secured pole position after completing the fastest qualifying lap, while the No. 8 TS050 HEV started from second on the grid. This set the scene for an exciting and close battle, with momentum swinging first one way and then the other. After 12 hours, the two Toyota cars were separated by only 8.6 seconds.
Although the two GR teams were always on the same lap, the No. 7 TS050 HEV seized the advantage during the night. As the final hours approached, the gap remained relatively stable at around two minutes, and the focus switched to bringing both cars home safely. All appeared to be going to plan until the No. 7 TS050 HEV had to make an unexpected pit stop during the 367th lap, ultimately handing victory to Nakajima in the No. 8 TS050 HEV. The outstanding one-two result for Toyota caps a highly successful season for the GR team.
Earlier in the race, the No. 7 TS050 HEV crew had set the fastest-ever Le Mans race lap of 3mins 17.297secs. This was one of several records broken during the event; Nakajima is the first circuit-racing World Champion from Japan, while Alonso became only the second driver to win four-wheel world titles in two different disciplines – the Spaniard has previously been crowned Formula 1 champion.
Shigeki Tomoyama, GAZOO Racing Company President, said: “I would like to truly thank all of our fans, supporting companies, and team members, who fought with one heart. In order to win Le Mans, a fast car alone is not enough; we also need a strong car and team. We wanted to improve on the victory last year, and made a continuous effort to improve everything; I believe this was clear in this year's victory. I was really impressed with the podium celebration when I saw the many GAZOO Racing flags and two Japanese flags flying in the air, and I am very happy to create a new page in the history of Le Mans.”
Tomoyama continued: “For Le Mans in 2020, and for the Hypercar class from autumn 2020, GAZOO Racing will continue to build on our achievements for an even better tomorrow. The continued support of our fans is really appreciated.”
Hisatake Murata, Team President, said: “I am proud of the overall performance and team spirit that we showed throughout the race. Congratulations to the new World Champions Buemi, Nakajima, and Alonso, and also on their second Le Mans victory. This was a dramatic end to an incredible season for GAZOO Racing, and we look forward to defending our titles next season.”
Race Notes:
• No. 8 TS050 Hybrid Electric Vehicle (Sébastien Buemi, Kazuki Nakajima, and Fernando Alonso)
o Position: 1st
o No. of Laps: 385
o Best Lap: 3'18.397
• No. 7 TS050 Hybrid Electric Vehicle (Mike Conway, Kamui Kobayashi, and José María López)
o Position: 2nd
o No. of Laps: 385
o Best Lap: 3'17.297

Contactless Payments Made Easy with Newly Launched HONOR 9A

An EU Carbon Border Tax Could Impact the GCC Oil Exporters and Be the Next Disru ...

ENEC CEO Inspires Next Generation of University Students During Webinar

Amp Up Your Beauty Routine With New Products From Missha Cosmetics

Commercial 5G on the Rise to Shape Bahrain's Digital Future