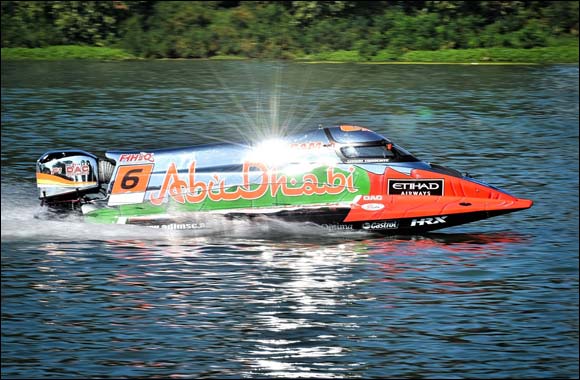 Share Home >> Entertainment
Torrente grabs pole position in Italy
San Nazzaro, Italy 23st September, 2022: Team Abu Dhabi’s Shaun Torrente saved his best for last to grab pole position for tomorrow‘s second round of the 2022 UIM F1H2O World Championship in Italy.
The two-times world champion, leading the standings after his opening round victory in France, produced a stunning last lap to win the six-boot qualifying shoot out at the Grand Prix of Regione Emilia Romagna.
Torrente’s dramatic late surge on the Po River in San Nazzaro gave him a tenth career pole position and denied Sharjah Team’s Sami Selio a second successive qualifying success of the season.
With Frenchman Philippe Chiappe third fastest from Sweden’s defending world champion, Jonas Andersson, Team Abu Dhabi’s Thani Al Qemzi set the fifth fastest time ahead of Italy’s Alberto Comparato.
Significantly for Torrente, who leads the championship from team-mate Al Qemzi, his two other closest challengers, Frenchman Peter Morin and Finland’s Alec Weckstrom, both failed to reach the shoot out, and have it all to do to stay in touch tomorrow.
In a frenetic weekend of world championship powerboat racing, the 15 drivers will have little time to unwind from tomorrow’s race action before tackling another three-phase qualifying battle on Sunday morning for the Grand Prix of Italy to follow in the afternoon.
After his win in France back in June, where he edged out Al Qemzi, and the duo combined to grab a big team championship lead, Torrente was in a hurry to resume his bid for a third F1H2O drivers’ title.
This was underlined in today’s free practice session over the 1,971m Po River circuit, as he set the fastest time ahead of Andersson.
Torrente later cruised through the first qualifying stage in third place behind two other former world champions Chiappe and Selio, with Al Qemzi ahead of Andersson in fifth.
The two Abu Dhabi drivers both battled their way through the second qualifying session - won by Selio - to enter the six-boat shoot out, with Torrente in fifth and Al Qemzi in sixth place as the battle for pole position heated up.
After leading from pole position in France before mechanical problems forced him out, Selio looked to have wrapped up qualifying again until Torrente powered his way to the No.1 spot in the dying seconds.
2022 UIM F1H2O World Championship leading positions:
1. Shaun Torrente (UAE) 20pts
2. Thani Al Qemzi (UAE) 15pts
3. Peter Morin       (FRA) 12pts
4. Alec Weckstrom (FIN) 9pts
5. Jonas Andersson (SWE) 7pts
6. Marit Stromoy (NOR) 5pts
Ends