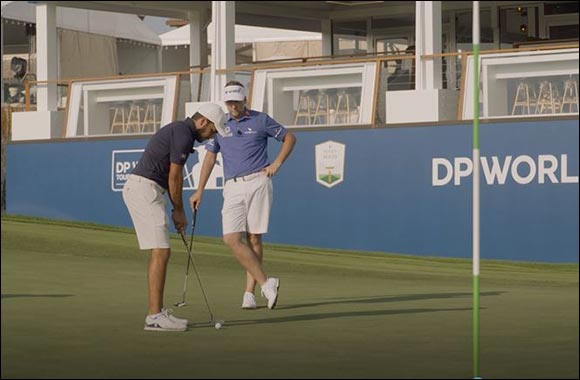 26 January 2021. Dubai, UAE:  To mark the second year of a mentorship program between Ryder Cup legend Ian Poulter and the UAE’s most promising golfer Ahmad Skaik, DP World releases a film that charts the rise of the 23-year-old Emirati talent as he worked his way up the ranks to secure his spot at a Rolex Series event on the European Tour.

The mentorship programme that DP World ran in partnership with the Emirates Golf Federation was designed to help Ahmed build his confidence prior to tournaments. Ahmad joined the mentorship programme at the start of 2020, having monthly calls with Ian as well as a face-to-face coaching session when they were both in Dubai ahead of the DP World Tour Championship. Just after the Abu Dhabi HSBC Golf Championship, Ahmad’s second participation at the Rolex series event on his home soil, he met up with his mentor Ian Poulter to discuss his performance and tactics on improving his skills and confidence.

Ian Poulter said: “I’ve had the chance to get to know Ahmad over the last nine months and I believe he has great potential. If he continues working as hard as he does now, the region could be seeing a superstar emerging in the next few years. Overall, it’s amazing to see the rising level of young golfers in the UAE. Platforms such as the Emirates Golf Federation National Junior Development Programme and Mentorship Programmes run by DP World, are fantastic opportunities for young talent to grow and I am really proud to play some part in it.”

Ahmed Skaik added: “I am really grateful for this amazing opportunity to be mentored by golfing legend, Ian Poulter. 2020 was a very challenging year but mentorship from Ian helped me keep myself on track with physical training and mental readiness to compete again when the time came. I feel more confident as a player now, and I am looking forward to improving my skills further.”

Pandora Unveils the Power of Sisterhood

Empower Registers 6% Growth in Number of Buildings Connected with a Total of 1,2 ...

Abbott Researchers Find Rare Group of People with Controlled HIV Who Could Be a ...

Pair Up and Play On With Uninterrupted Sound from HONOR

Trying to get the most out of your new HUAWEI FreeLace Pro neckband? Here are a ...

Celebrate the Brilliance of Women with Tanishq's Great Diamond Collection

Samsung Unboxes its 2021 Lineup, Letting You Discover More of What You're Passi ...