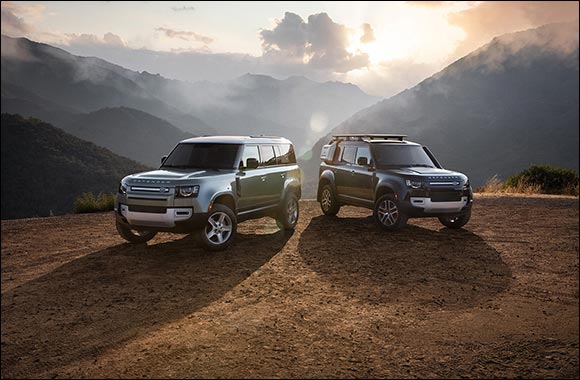 Share Home >> Automobile
 New Defender wins top honors for its outstanding off-road capability, on-road comfort, value, and modern style
 Highly anticipated New Defender makes its triumphant return to the U.S. after being absent in the market for more than 20 years
 The world’s most iconic 4x4 and the choice of adventurers and expedition leaders for more than 70 years has been reinvented for the 21st century, as the toughest and most capable Land Rover vehicle ever produced
 Configure your New Defender at www.landrover-me.com/defender
(Dubai, United Arab Emirates) – October 27, 2020:  Land Rover announced that the New Land Rover Defender has been named the winner of MotorTrend’s 2021 “Golden Calipers” for SUV of the Year.
With a nod to the historic Land Rover Defender, the New Defender is the toughest and most capable Land Rover vehicle yet, combining a new body structure with all-new technologies and legendary engineering to create a Defender fit for the 21st century.
“It’s a great achievement, and an honor, for the New Defender to be selected as the SUV of the Year from MotorTrend,” said Joe Eberhardt, President & CEO, Jaguar Land Rover North America. “We know enthusiasts have been waiting for the return of this icon back to the U.S for more than 20 years, and we especially want to thank our designers, engineers and everyone else at Land Rover for helping to create a 21st century Defender that can be personalized and enjoyed for generations to come.”
Every year, the MotorTrend editorial staff meticulously selects a field of worthy contenders for its SUV of the Year® award. Contenders are put through MotorTrend’s standard battery of instrumented testing, a rigorous series of tests that measure performance under controlled circumstances, which allow the editors to evaluate the real-world driving behavior of each of the vehicles.
“We are thrilled to honor the Land Rover Defender with our SUV of the Year award,” said MotorTrend Editor-in-Chief Mark Rechtin. “Part of the word ‘transportation’ is not just the driving but the feeling of being transported. The moment you get into a Land Rover Defender, you are transported. Every design element gives the aura of journey, safari, moving outward into the world with courage.”
This year’s group of 28 new or redesigned SUVs and variants were evaluated and selected for excelling in MotorTrend’s six key category criteria: safety, efficiency, value, advancement in design, engineering excellence, and performance of the intended function, to determine the one model that performs best for its intended purpose and to MotorTrend’s highest standards.
In choosing the New Defender as its SUV of the Year, MotorTrend found that the reimagined icon delivered much more than just legendary off-roading capability. In redesigning the vehicle’s platform and chassis, Land Rover created a vehicle with excellent on-road comfort and handling, a slew of active and passive safety features, and strong value compared to its direct competitors.
“One SUV stood roof rack and rearviews above the rest,” said Senior Features Editor Jonny Lieberman. “There are certain vehicles you can feel are special after only 50 feet of driving. The Defender bowled us over with the wonderful synchronization of its stout engine and yeoman
transmission; the exceptional ride quality; its ambient nature; the baked-in, go-anywhere capability; and its amazing value.”

Persil Abaya Shampoo Supports the Community in the GCC, Donates Abayas to the Ne ...

Dubai Municipality is all set to receive Eid Al Fitr

Your Guide to Flawless Brows this Eid with Benefit Cosmetics!

20 Years of Modern Driving Pleasure in the Mini

Department of Municipalities and Transport in cooperation with Modon deliver sev ...

20 Percent Off Denny's On Demand This Eid

DHA Announces Timings of Healthcare Facilities during the Eid Break