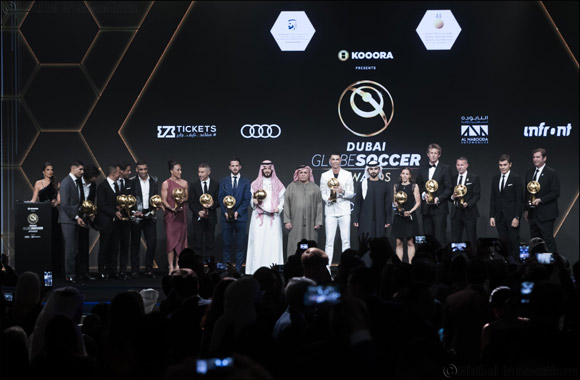 Share Home >> Entertainment
UAE, Dubai, 30 December 2019:   the 11th edition of the Dubai Globe Soccer Awards draws to a conclusion with great success, at the culmination of a two-day session that saw the most influencial personalities in the world of international football appear on the stage of the Dubai International Sports Conference to discuss the most current issues in the football world.
This year, 17 awards were presented during the Globe Soccer evening event, which saw Portuguese champion Cristiano Ronaldo honored for the sixth time as Best Men’s Player of the Year.
Therefore, Cristiano once again wins the top prize in acknowledgement of his stunning success during the season, winning in Italy with Juventus FC (Serie A Tim) and in Europe with Portugal (UEFA Nations League).
But this was not only Cristiano’s year: joining him on the stage in Dubai to receive an award dedicated to the best athletes at the international level was also the moment of the English champion Lucy Bronze, who for the first time in Dubai raised the award allocated to the Best Women’s Player of the Year.
After a stellar season with Olympique Lyonnais, which can count 4 prizes in its trophy cupboard for 2019 – French Championship, French Cup, Trophée des Championnes (France) and UEFA Women’s Champions League (Europe) – Bronze enters into the history of Globe Soccer as the first holder of the prize dedicated to women in football.
For the moment of Best Coach of the Year on the other hand it was Jurgen Klopp who was chosen first among the finalists nominated by the Dubai Globe Soccer Awards jury. Already winner of FIFA’s ‘The Best’ Football Coach award for 2019, the German coach has managed to stack up an impressive array of awards as Liverpool’s manager, by winning the UEFA Champions League, the UEFA Super Cup and the FIFA Club World Cup.
It was no coincidence that Liverpool FC – among the three club finalists selected by the European Club Association (ECA) – was recognized this year as Best Club of the Year, along with its goalkeeper Alisson Becker, holder of the Best Goalkeeper of the Year award for the second consecutive year.
As for the other awards, Jorge Mendes triumphed once again among the agents, this year winning award number 9 since the establishment of the Dubai Globe Soccer Awards, a record that is becoming increasingly difficult to match. With him on the Globe Soccer stage, his star pupil also appeared, the promising young Portuguese player Joao Felix, class of ’99, won this evening as the Best Revelation Player. His gold transfer from Benfica to Atletico Madrid contributed in no small part to the victory of his agent.
Among the referees, it was again a woman who won the award for Best Referee of the Year, France’s Stephanie Frappart, the first woman referee in history to officiate over a European men’s football Super Cup final (the match between Liverpool and Chelsea, held on 14 August 2019).
Dubai Globe Soccer Awards also recognizes football stars in the Arab region in cooperation with Kooora: the Saudi club Al-Hilal SFC was named Best Arab Club of the Year; and the Moroccan striker, leading figure of the Saudi club Al-Nassr, Abderazak Hamdallah won as Best Arab Player.
“The global success of the Dubai Globe Soccer Awards over the years is tangible proof of how the football industry has grown exponentially in every aspect in the Middle East. Through these awards, we aim to motivate and inspire athletes, both young and young at heart, men and women, as well as all those who work tirelessly behind the scenes, always giving the best of themselves for the continuous expansion of this wonderful sport that is football”, declared Tommaso Bendoni, CEO of Dubai Globe Soccer Awards.
Following are the 17 awards presented at the 11th edition of the Dubai Globe Soccer Awards:
1. Best Academy of the Year: AFC Ajax and S.L. Benfica
2. Best Agent of the Year: Jorge Mendes
3. Best Club of the Year: Liverpool FC
4. Best Coach of the Year: Jurgen Klopp (Liverpool FC)
5. Best Goalkeeper of the Year: Alisson Becker
6. Best Men’s Player of the Year: Cristiano Ronaldo
7. Best Partnership of the Year Award by SportBusiness: Manchester City F.C. and SAP
8. Best Referee of the Year: Stephanie Frappart
9. Best Revelation Player: Joao Felix (Atlético Madrid, Portugal’s national team)
10. Best Sporting Director: Andrea Berta (Atlético Madrid)
11. Best Women's Player of the Year:  Lucy Bronze
12. Best Young Arab Player of the Year: Achraf Hakimi
13. Kooora – Best Arab Club Award: Al Hilal SFC (Saudi Arabia)
14. Kooora – Best Arab Player Award: Abderazak Hamdallah (Al-Nassr FC, Saudi Arabia)
15. Player Career Award: Miralem Pjanic and Ryan Giggs
Considered as part of the ‘Grand Slam’ of football award ceremonies alongside the Ballon d’Or and The Best FIFA Football Awards, the star-studded event was organised in partnership with Dubai Sports Council (DSC) and held alongside DSC's Dubai International Sports Conference.
The 11th edition of Dubai Globe Soccer Awards is supported by title sponsor Kooora and strategic partner ITP Live. The event is powered by 7tickets, Al Nabooda, Audi, Emirates, Hublot, Infront, Lavazza, Abu Dhabi Media and Dubai Sports Channel.