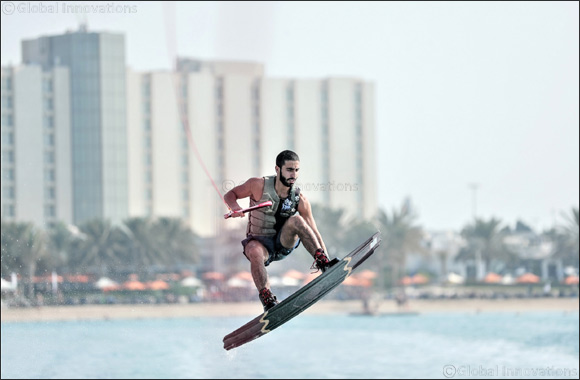 Abu Dhabi, UAE,14 November, 2019:   Wakeboarding in the UAE will be given a major boost next week when the country’s first ever international team competes against the world’s best on a spectacular stage in Abu Dhabi.

The team is captained by Khaled Subaa who takes part in the Open Men’s category along with Omeir Saeed. His younger brother, Ahmed Saeed, lines up in the 14 & Under Boys class with Hamed Al Belooshi and Mohamed Al Belooshi, while Ahmed Al Remeithi competes in the Junior 18 & Under Men’s event.

ADIMSC and the International Waterski & Wakeboard Federation, the sport’s governing body, are working together to create a superb event venue both for competitors and spectators at the Eastern Mangroves Promenade.

The organisers believe the event, based at the Anantara Eastern Mangroves Abu Dhabi Hotel, will create a big surge of interest in wakeboarding and establish the UAE capital as one of the sport’s leading international destinations.

“The arrival of the world championships in Abu Dhabi for the first time coincides perfectly with the opening of our new wakeboard academy,” said Salem Al Remeithi, General Manager of ADIMSC.

“We’re working closely with the IWWF to create a centre of excellence here for towed water sports which will help people at all levels of ability to develop their skills and knowledge of the sport.”

IWWF Executive Director Paul Fong said: “Abu Dhabi has created a brilliant stage for the IWWF Wakeboard Worlds, and we’re looking to excite the kids and draw a generation of young people into wakeboarding.

“For any sport to grow it needs local heroes, and the creation of a UAE team is a big step in this direction. The message to all young and established water sports enthusiasts and their friends is come to watch and engage with the world’s best in Abu Dhabi next week.”

More than 150 riders from 31 countries will compete for IWWF World Wakeboard Championships in ten age-group categories for both men and women, as well as the team overall title. The Open Men’s & Women’s categories offer a cash purse of USD50,000.

followed by the official opening ceremony at 5pm. Four days of competition starting on Wednesday

morning is rounded off on Saturday by medal ceremonies and a closing ceremony and awards  dinner at Al Khatim Desert.

The Award-winning #burjumanfoodart Festival is Back by Popular Demand!

Made in Italy: Top Picks from the Latest Deborah Milano Make-Up Range

Maserati Announces Its Plans for The Development and Production of the New Elec ...

6 Trends That Will Dominate Beauty in 2020 According to Foreo

SEHA to Showcase the Latest Technology in Diagnostics and Interventional Radiolo ...