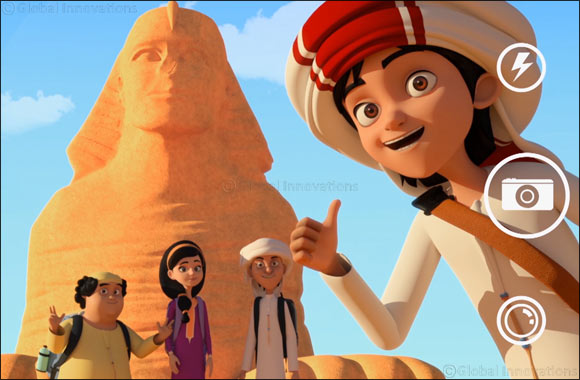 Dubai, UAE - June 13, 2016:  Turner, a division of Time Warner and parent company of Cartoon Network Arabic announces that popular Emirati cartoon, Mansour is back this Ramadan with new adventures revolving around the heritage and values of the UAE, mixed with comedic storylines and fun characters. The hit cartoon created by Rashed al Harmoodi and produced by Cartoon Network Studios Arabia has been a huge success in the region. According to TView peoplemeter audience measurement, ratings reveal that Mansour ranks first within the competitive timeslot versus other kids’ channels.

The success of the show has been augmented with the Mansour Run mobile app, which has been downloaded 1.5 million times globally. The app is the #1 free downloaded game in seven countries namely: UAE, KSA, Bahrain, Oman, Lebanon, Jordan and Egypt. Additionally, Mansour viewership is extended by strong interaction on social media platforms such as Facebook, Youtube and CartoonNetworkArabic.com.

The Emirati creator of the cartoon Mansour, Rashed al Harmoodi, said: “I am thrilled that Mansour has resonated with kids in the region and excited to see that the blend of comedy with short Arabic tales continues to entertain them. We are also working on the launch of season three, presently in production, with many new adventures and stories to tell.”

“We’re very proud of the success of Mansour. Rashed al Harmoodi has brought his world of imagination through the cartoon, into the hearts and lives of children. The strong viewership numbers are a testament to this achievement. We will continue to work with him to produce the beloved cartoon and share it with all our young fans across the region,” said Tarek Mounir, Vice President and General Manager Middle East, North Africa, Turkey, Greece & Cyprus at Turner.

Due to the increasing popularity of the show, Cartoon Network Arabic has also re-launched ‘Ramadan Riddles’ during Mansour’s airtime throughout the holy month. ‘Ramadan Riddles’ offers children the opportunity to participate in the online competition by tuning in to watch episodes of Mansour on a daily basis from 2:55pm KSA timing and repeated at 4:50 and 10:05 pm everyday. During the show, a code to the riddle will be revealed, which they then need to note in the website, CartoonNetworkArabic.com, to solve


Travellers Should ‘Wear to Care' in the New Normal says WTTC

American School of Creative Science in Al Barsha will be Shifting to Nad Al-Sheb ...

Dubai Shopping Malls Group to Give Away AED1 Million Worth of Prizes in Digital ...

Dubai Retail Has the 'Keys' to Summer

SAIF Zone Reopens Offices, About 50% of Staff Return to Work