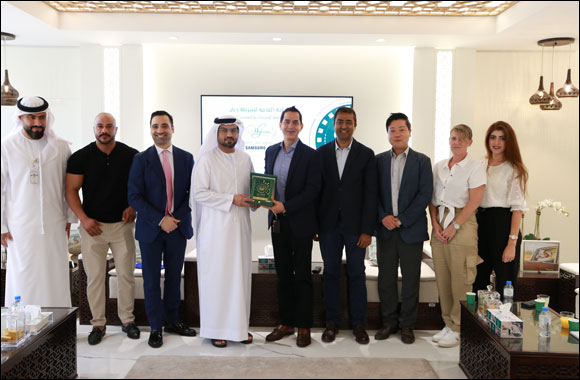 Dubai, UAE – September 22, 2022 – Samsung Gulf Electronics has extended its appreciation to Dubai Police for supporting the company's Anti-Counterfeit Program (ACP) in the UAE.

Samsung representatives met Major General Jamal Salem Al Jallaf, Director of the General Department of Criminal Investigation at Dubai Police (CID), and Brigadier Salah Bu Osaiba, Director of Anti-Economic Crimes Department, to express gratitude for the Department's efforts to combat counterfeit products, and present to Dubai Police the Samsung appreciation trophy for their efforts in this regard.

Maj. Gen. Al Jalaf reiterated that frauds and counterfeits pose a risk to consumers on all levels, including health, environment, and economy, and negatively affect commercial activities in Dubai and the international brands copied. He added that the CID pays excellent attention to combating economic crimes to protect the rights of trademark owners. He also called on the public to avoid purchasing these products and prevent the harm caused to the consumer and society.

Seong Hyun Lee, President of Samsung Gulf Electronics, said: 'Our commitment to safeguarding the community from counterfeit aligns with Dubai Police's vision to combat economic crimes and create a society where low-quality, counterfeit products are no longer a threat to consumers. We appreciate Dubai Police's efforts in supporting our Anti-Counterfeit Program and empowering us in the fight against counterfeits.'

During the meeting, both parties outlined the results of the ACP project that Samsung Gulf Electronics oversees, discussed further collaboration with Dubai Police and innovations in the field of anti-counterfeiting and ways to protect the country's economy and consumers from safety hazards.

Further, Samsung offered valuable insight on international counterfeit standards and regulations as well as the role of ESG in reducing the negative impacts of these malpractices.

Authors Introduce Students to Emirati and Arab Cultures during Visits to Mexican ...

IPA President Calls for Equal Opportunities for Women, not Equality with Men

Cotton On: BODY Opens Its Third Store at Nakheel Mall The Palm

Sultan Bin Tahnoon: The Memory of our Heroic Martyrs will remain in Our Hearts a ...

Theyab Bin Mohamed Witnesses the Signing of a Strategic Partnership between Etih ...

Dubai will Host the “Lady of the Universe” next March