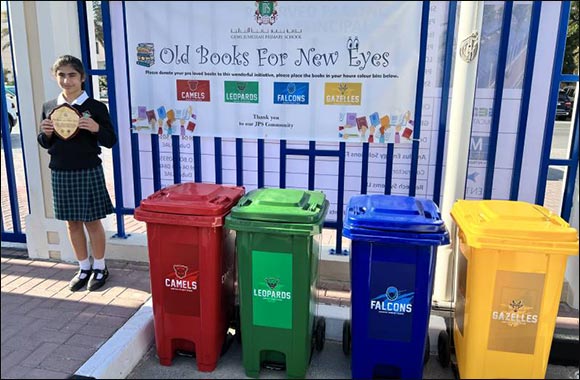 Share Home >> Education & Training
• HRH The Duke of Cambridge and The Duke of Sussex host virtual ceremony
• Award is the highest accolade a young person can receive for social action
• Ten students from seven UAE GEMS schools named in official roll of honour
DUBAI, United Arab Emirates: Ten young heroes from GEMS Education have been awarded the highly coveted and prestigious Diana Award 2022.
The Diana Award is the only charity set up in memory of Diana, Princess of Wales, and her belief that young people have the power to change the world. The annual awards recognise and celebrate young people’s dedication to humanitarian and social action.
The students, from seven different GEMS schools in the UAE, were celebrated in a virtual award ceremony hosted by The Duke of Sussex and HRH The Duke of Cambridge on 1 July – Princess Diana’s birthday.
The Diana Award is the longest running award for young people that is given to individuals and groups through a retrospective nomination process only. The young people that are honoured do not work towards the award; instead, they demonstrate their suitability through their actions, without any expectation of reward.
Zafar Raja, Chief Operating Officer, GEMS Education, said: “We are proud and delighted to see so many GEMS students recognised at the highest international level for their dedication and passion for social change. We know that our young people truly are changemakers now and in the future, and we believe they will continue to make an incredible impact on our world. Congratulations to all our young heroes.”
The GEMS students who have received this year’s award are:
• Sana Asraf, Grade 12, GEMS Our Own Indian School – Dubai
• Parv Bhadra, Grade 12, GEMS Modern Academy
• Jovita Bhaumik, Grade 8, GEMS New Millennium School – Al Khail
• Krusha Desai, Grade 12, GEMS Our Own Indian School – Dubai
• Khushi Gadhia, Year 5, GEMS Jumeirah Primary School
• Irfan Mohammed Olasheri Kalathingal, Grade 12, GEMS Our Own English High School – Sharjah Boys
• Christina Mary Rajan, Grade 4, GEMS Millennium School – Sharjah
• Abijith Reji, Grade 12, GEMS Our Own Indian School – Dubai
• Gitali Sinha, IB 1, GEMS Modern Academy
• Adrika Vats, Grade 12, The Cambridge High School – Abu Dhabi
*For more details on each awardee’s achievements please refer to attached document
Khushi Gadhia, a student at GEMS Jumeirah Primary School (JPS) was recognised for her action supporting the Lions Club of Nairobi. Thanks to her campaign to engage school children in the UAE and make them aware of the literacy gap in Kenya, hundreds of volunteers at GEMS schools and beyond have collected more than 100,000 books and established over 50 libraries in Kenya, Uganda and Tanzania.
Khushi Gadhia, Grade 5 pupil at GEMS Jumeirah Primary School, said: “I was so surprised and humbled to be named as a recipient of this year’s Diana Award. This award is so special, in memory of Princess Diana, a true advocate for social change. It gives me more courage and inspiration to work towards improving literacy in Kenya and all over the world. I’d like to thank my school community and all the organisations and individuals that have supported the Old Books for New Eyes initiative.”
The Diana Award’s mission is to foster, develop and inspire positive change in the lives of young people.
Tessy Ojo CBE, CEO of The Diana Award, said: “We warmly congratulate our new Diana Award recipients from the UK and across the world who are changemakers for their generation. It is especially poignant as we remember Princess Diana 25 years on. We know by receiving this honour they will inspire more young people to get involved in their communities and begin their own journey as active citizens.”