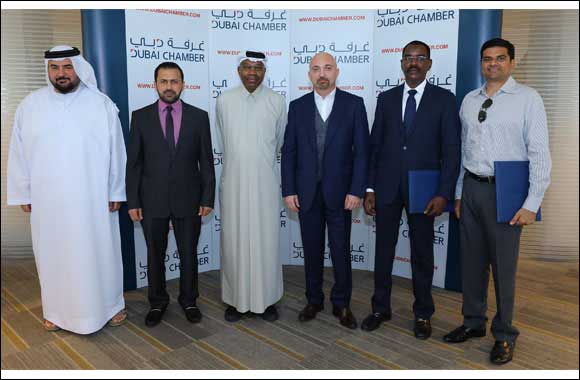 Share Home >> Government, Legal & Humanity
• A total of 112 companies have been awarded under Exporter of the Month since the launch of the initiative
• Member companies recognised for exceptional export performance at recent ceremony
Dubai, UAE: Dubai Chamber of Commerce and Industry recently hosted its Exporter of the Month ceremony at its head office where four member companies were recognised for outstanding trade performance during last four months of 2019.
Including the most recent honourees, at total of 112 companies have been awarded under Exporter of the Month since the launch of the initiative.
Promising International Trading Co. was named “Company with the Highest Export Value” for September. Kingspan Insulation LLC was honoured for having the highest number of export markets in October.
ADI International was awarded for issuing the highest number of Certificates of Origin in November, while Sunshine Star DWC-LCC was acknowledged as a recent startup company with the highest value of exports.
During the ceremony, Mr. Atiq Juma Nasib, Senior Vice President of Commercial Services, Dubai Chamber, congratulated all of the honourees and presented the company representatives with certificates of recognition and an Exporter of the Month trophy.
Mr. Nasib explained that since its inception in 2009, Dubai Chamber’s Exporter of the Month initiative has raised industry standards, brought many benefits to member companies and fostered a culture of excellence within Dubai’s trade sector.
“By analysing the performance of our members, we can get a much clearer picture about market conditions in the trade sector and identify key areas where companies are excelling. Beyond the benefits of recognition, Exporter of the Month provides a platform for top-performers to gain recognition and share best practices with other industry players,” he added.
Dubai Chamber launched the Exporter of the Month initiative in 2009 under the name Exporter of the Quarter, to recognise the outstanding exporting companies in Dubai. The selection of companies is based on distinct and specific criteria derived from the Chamber’s Certificate of Origin database.

The Department of Culture and Tourism – Abu Dhabi Extends Ban of Events and Wedd ...

ADX Achieves 93% in Disclosure Compliance of the Annual Financial Statements 201 ...

Central Bank Gold Demand Eases, but Purchases Pick Up at Start of 2020

Brighten Up With KARL LAGERFELD

MBRSC Releases GIF Image Showing Decline of NO2 in the GCC