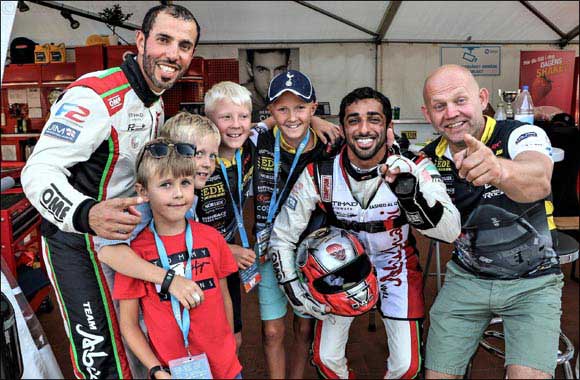 Share Home >> Entertainment
Al Qemzi is tough, cool F2 champion says Sundsdal who aims for strong finish 20 years on from UAE debut
Abu Dhabi, UAE, 4 December, 2019:   Frode Sundsdal returns to action in this weekend’s Grand Prix of Abu Dhabi after breaking his neck earlier this season, and the Norwegian powerboat racing legend says it is no surprise that the UAE capital has produced another world champion.
Sundsdal, whose career achievements include three world titles and 11 world speed records, lines up in the final round of the 2019 UIM F2 World Championship 20 years after racing for the first time in Abu Dhabi.
Having already clinched the UIM F2 world title for the second time in three years, Rashed Al Qemzi wants to round off the season with a victory on home waters, and Sundsdal sees much more success ahead for the Emirati and Team Abu Dhabi.
“I’ve been racing against Rashed for the last three years, and I’ve seen a lot of change in him,” said the 11-times Norwegian and triple European champion, who arrived at Abu Dhabi International Marine Sports Club a week early to start his race preparations.
“He is really developing, and turning into a tough competitor. The pressure doesn’t get to him. He really knows how to keep his cool. And he has a lot of help.
“When you walk into this club you see that the Team Abu Dhabi boys have been there since 6 o’clock in the morning. The other guys are back home in Europe sleeping, and they are still wondering why we can’t beat them. It’s no secret to me.”
Sundsdal, who organises the Norwegian round of the UIM F2 World Championship in Tønsberg,  broke his neck during a race accident in the European Championship earlier this year.
Keeping the news from his doctor, he started, and finished third in Tonsberg’s speed run – won by Team Abu Dhabi’s Rashid Al Tayer - prior to the Grand Prix of Norway in August. “But after that I lost vision and it was too painful to race the next day,” he said.
Back in race mode again this weekend for the first time since then, he is targeting a top six finish, and certainly hopes for better fortunes than he experienced 20 years ago when a spectacular crash halted his progress on the first lap.
While ADIMSC is renowned as a world championship powerboat racing venue, this is Abu Dhabi’s first UIM F2 Grand Prix, and with a powerful 20-team starting line-up the stage is set
for a thrilling grand finale to the season.
Al Qemzi will be fighting off a succession of top challengers, including four drivers each able to finish championship runner up, namely Portugal’s Duarte Benavente, Sweden’s Ola Pettersson, Dutchman Ferdinand Zandbergen and Germany’s Stefan Hagin,
The first free practice session gets under way at 3pm on Thursday with another practice session following at 10.15am on Friday before the three-stage qualifying series starting at 3.30pm. The 2019 Grand Prix of Abu Dhabi begins at 3.30pm on Saturday.
UIM F2 World Championship leading positions after 4 of 5 rounds
1. Rashed Al Qemzi UAE 75pts (world champion)
2. Duarte Benavente POR 38
3. Ola Pettersson SWE 34
4. Ferdinand Zandbergen NL 34
5. Stefan Hagin GER 20
6. Daniel Segenmark SWE 20