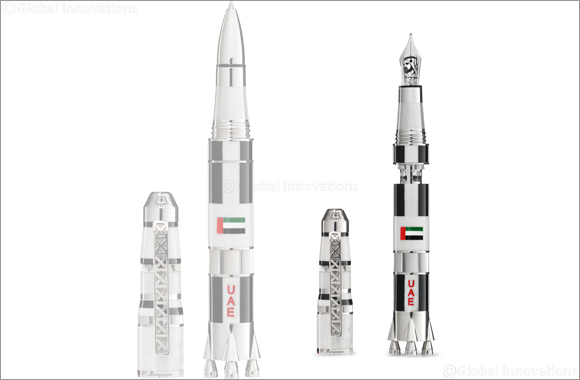 Dubai, United Arab Emirates, 17 October 2019:  To mark the historic event of Hazzaa AlMansoori becoming the first Emirati astronaut in space and his safe return from the International Space Station (ISS), Montegrappa has created a very exclusive collectors’ edition of pens based on the unique 1/1 piece presented earlier to MBRSC. The luxurious writing instrument is also available as a rollerball, and without some of the key elements of the unique version.

On the 25 September 2019, the celebrated Emirati Astronaut Hazzaa AlMansoori was launched to the International Space Station, making him the first Emirati in space. The project was managed and executed by the Mohammed Bin Rashid Space Centre (MBRSC). During his eight day mission, Hazzaa carried out various scientific experiments and observations along with other international astronauts on the ISS, before returning to Earth safely on 3 October 2019.

To commemorate this historic event Montegrappa created a unique fountain pen and presented it to the Mohammed Bin Rashid Space Centre (MBRSC). The pen, shaped in the form of a rocket, featured the UAE flag on the barrel, the logo of MBRSC on the cap and a portrait of His Highness Sheikh Mohammed bin Rashid Al Maktoum, Vice-President and Prime Minister of the UAE and Ruler of Dubai, on a solid gold nib.

“In the spirit of joining the celebrations and commemorating this special moment in the country’s history, we crafted this unique piece and presented it as a gift”, said Charles Nahhas, Middle East Distributor of Montegrappa. “The unique pen was on display in our Dubai Mall boutique during the month of July, but was not for sale, and was presented to the MBRSC in August in the run up to the September launch.

“The response to this has been overwhelming. We have had many offers from customers desiring this piece, but we were sorry to disappoint them since this bespoke piece was crafted for the MBRSC and not for sale to the public. We have instead created a very exclusive production run for special collectors, and without some of the key elements of the unique version.

“We are immensely proud to have been involved in some small way in this historic occasion, and have been following the mission closely”, continued Nahhas. “We are delighted with the success of the mission and most of all with the safe return of Hazzaa back to Earth and to the UAE. None of this would have been possible without the great leadership in this country and their vision to empower and educate the people of the UAE.”

There cannot be a better memento to own, than a writing instrument, which has always been a representation of education and empowerment.


Double Your Productivity with the LG Gram +View

Gifts for Every Occasion with Pandora

Hotpack Grows its Foothold in Morocco, joins Hands with Retail Holding in Region ...

FOCP Honoured in Two Categories at 2022 Edition of Global Good Governance (3G) A ...

SCFO Shines Light on its Achievements at the Abu Dhabi International Book Fair ...

Day one of Global Aerospace Summit 2022: Commitments to Net Zero and Digital In ...

Samsung's Galaxy A73 5G: Where Awesome Truly is for Everyone