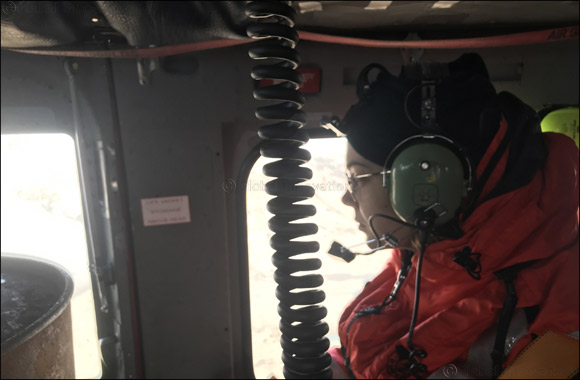 Abu Dhabi, August 22, 2019:  A team of researchers from NYU Abu Dhabi’s Center for Global Sea Level Change, supported by the Office of Polar Programs of the USA National Science Foundation, have found that unusually warm ocean water is causing rapid melt at the Greenland outlet glacier Helheim, one of the largest in the region.

For the first time, warm waters that originate in the tropics have been found at uniform depth, displacing the cold polar water at the Helheim calving front, causing an unusually high melt rate. Typically, ocean waters near the terminus of an outlet glacier like Helheim are at the freezing point and cause little melting.

On August 5, 2019, researchers, led by Professor of Mathematics at NYU’s Courant Institute of Mathematical Sciences and Principal Investigator for NYU Abu Dhabi’s Center for Sea Level Change David Holland, deployed a helicopter-borne ocean temperature probe into a pond-like opening, created by warm ocean waters, in the usually thick and frozen mélange in front of the glacier terminus.

Normally, warm, salty waters from the tropics travel north with the Gulf Stream, where at Greenland they meet with cold, fresh water coming from the polar region. Because the tropical waters are so salty, they normally sink beneath the polar waters. But Holland and his team discovered that the temperature of the ocean water at the base of the glacier was a uniform plus four degrees centigrade from top to bottom at depth to 800 meters. The finding was also recently confirmed by NASA’s OMG (Oceans Melting Greenland) project.

“This is unsustainable from the point of view of glacier mass balance as the warm waters are melting the glacier much faster than they can be replenished,” said Holland.

All around Greenland, at depth, warm tropical waters can be found at many fjord locations. Their presence over time changes depending on the behavior of the Gulf Stream. Over the last two decades, the warm tropical waters at depth have been found in abundance. Greenland outlet glaciers like Helheim have been melting rapidly and retreating since the arrival of these warm waters.

“We are surprised to learn that increased surface glacier melt due to warming atmosphere can trigger increased ocean melting of the glacier,” added Holland. “Essentially, the warming air and warming ocean water are delivering a troubling ‘one-two punch’ that is rapidly accelerating glacier melt.”

Dubai Retail Has the 'Keys' to Summer

SAIF Zone Reopens Offices, About 50% of Staff Return to Work

Contactless Payments Made Easy with Newly Launched HONOR 9A

An EU Carbon Border Tax Could Impact the GCC Oil Exporters and Be the Next Disru ...

ENEC CEO Inspires Next Generation of University Students During Webinar

Amp Up Your Beauty Routine With New Products From Missha Cosmetics