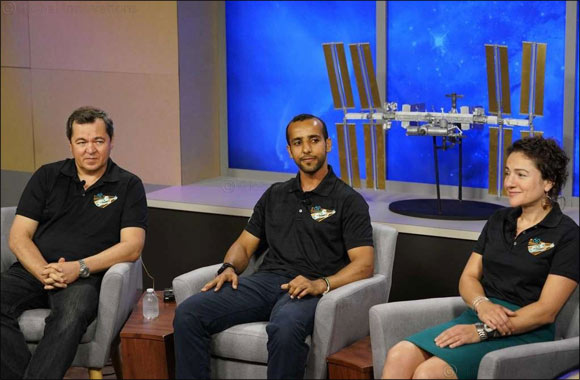 Share Home >> Travel & Tourism
• The training programme lasts for two weeks and includes training on various units and components of the US Segment of the International Space Station and conducting scientific research in cooperation with NASA
• Hazzaa AlMansoori in a press conference for NASA: We are ready for the task and are doing our best to make it a success through the high-level training we receive and the hard work we carry out with the crew
Dubai, United Arab Emirates -  16 July  2019:   Emirati astronauts Hazzaa AlMansoori and Sultan AlNeyadi began a new training at NASA's Lyndon B. Johnson Space Center (JSC). The two-week programme includes training on various units and components of the US segment of the International Space Station (ISS), which includes the Japan Kibo laboratory and the Columbus Laboratory, to conduct scientific research in cooperation with NASA.
The training is part of the preparations for the first Emirati astronaut to travel to the ISS, in approximately 10 weeks from now, aboard the Russian Soyuz-MS 15. NASA also held a press conference for the mission's main crew, which is set to travel to the ISS on 25 September. The mission’s main crew is composed of flight leader Cosmonaut Oleg Scripochka and NASA Astronaut Jessica Meir.
This is part of an agreement between the Mohammed bin Rashid Space Centre (MBRSC) and NASA to conduct a series of training for the two Emirati astronauts at the Lyndon B. JSC and to conduct scientific research suited to short-term missions to the ISS.
The training the astronauts are undergoing includes receiving an overview on NASA equipment and devices on board the space station, in addition to handling emergency situations, especially ammonia gas leakage and depressurisation. AlMansoori and AlNeyadi will get to learn more about the ISS through a complete model of the station located at NASA headquarters. The model includes the Russian and American segments.
The NASA training programme includes scientific experiments that will be conducted by the mission’s crew. The research examines the impact of space on humans in a micro-gravity environment. Upon the arrival of AlMansoori, the nine-person crew aboard ISS, will undergo a series of experiments that cannot be conducted in Earth. These efforts will contribute to the expansion of human knowledge of land, space, and physical and biological sciences that will benefit humanity.
His Excellency Yousuf Hamad AlShaibani, Director General of MBRSC, said, “MBRSC is committed to making strategic partnerships with major international space agencies, as part of our efforts to support the UAE in preparing Emirati cadres to enrich scientific progress to serve humanity and make further achievements in space industry, science and research. This serves the ambitious aspirations of a national economy based on knowledge, innovation, and creativity. The NASA training follows a training that the astronauts received last month at the European Astronaut Centre (EAC) of the European Space Agency (ESA), in Germany, in preparation for sending the first Emirati astronaut in about 10 weeks”.
Salem AlMarri, Assistant Director General for Science and Technology Sector, Head of UAE Astronaut Programme, highlighted that these exercises are essential for enhancing the skills of AlMansoori and AlNeyadi to enable them to use the equipment at the ISS, and identify several aspects of life aboard the station, such as preparing food. “By sending the first Arab astronaut to the ISS, the UAE contributes to enriching scientific experiments that study microgravity, including its impact on the human body,” added AlMarri.
“This is a huge responsibility for us, and we are ready to do our best to make it a success, especially with the high-level training we are receiving, and the hard work we do with the crew. Through the scientific experiments that we will take part in, we hope to leave a mark for the UAE in the record of human space missions, which contributes to the enrichment of human knowledge,” said AlMansoori at NASA’s press conference.
AlMansoori will travel for an eight-day space mission to the ISS aboard a Soyuz-MS 15 spacecraft from the Baikonur Cosmodrome in Kazakhstan on 25 September 2019 and return to Earth aboard a Soyuz-MS 12.
MBRSC runs and manages the UAE Astronaut Programme, which is part of the UAE National Space Programme, and aims to prepare the first Emirati astronaut corps to participate in global space exploration missions. The programme contributes to achieving the national strategy to develop young Emirati cadres and prepare future generations, according to the highest international standards, and achieve their aspirations to participate in scientific explorations, as well as the aspirations of the UAE in this field.
The UAE Astronaut Programme, funded by the ICT fund of the Telecommunications Regulatory Authority (TRA). Launched in 2007, this fund, which is the first of its kind in the Arab world, aims towards supporting research and development within the ICT sector in the UAE, helping it to grow into a nationally significant industry with a leading place in the world.
-

Top Personal Trainer Thanks Dubai Sports Council for “Be Fit, Be Safe” Campaign

Leukaemia Affects Individuals Between 20 to 44 Years of Age, With Females Gettin ...

Cutting-Edge Technology Solutions from TP-Link for Work at Home or Distance Lear ...

Union Coop to Operate 24 Hours With All Goods Available

Keeping the Community Safe and Informed on COVID-19

Handwashing Research Highlights Countries That Could Be at More Risk

Brighten Up With Marina Rinaldi

The Methods That Must Be Followed to Avoid Infection With the Corona Virus COVID ...

What Are the Effects of the Covid-19 Pandemic on Private Healthcare Insurance an ...